There are  great summer events happening in Ontario and Quebec, Canada. 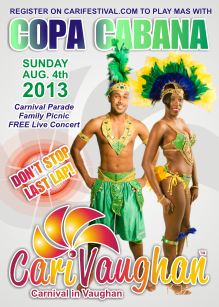 Celebrate Biodiversity: “The World of Bats”

Summer Music in the Garden series

Excavation Activities Are Back at Parc National de Plaisance

Union Pearson Express On Track for 2015 Pan/Parapan Am Games

Here are the facts.

The Scotiabank Caribbean Carnival Toronto (formerly Caribana Parade) event this weekend will involve a road closure. Lake Shore Boulevard will be closed in both directions from Colborne Lodge Drive to Strachan Avenue from Saturday, August 3 at 12:01 a.m. to Sunday, August 4 at 6 a.m.

Residents and visitors are encouraged to come out and enjoy this event. Businesses in the area will be open to pedestrians but some roads will be closed to vehicles.

Those who need to drive in the general vicinity of special events should allow extra time to get to and from their destination.

More information is available at http://www.toronto.ca/torontostreets/.