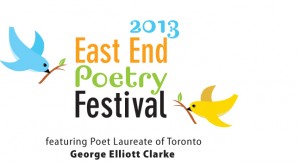 Clarke, who was appointed through Harvard’s English department, will teach two courses based on African-Canadian literature and international Black poetry. He will also chair the Canada Seminar, which organizes presentations and discussions with public figures, scholars, artists and experts in various fields.

“This appointment by one of the world’s most respected universities is an exceptional opportunity for the Poet Laureate to enhance his, and the City of Toronto’s, international profile,” said Councillor Michael Thompson (Ward 37 Scarborough Centre), Chair of the City’s Economic Development Committee. “He will also remain active in Toronto’s literary community as our city’s Poet Laureate during his time at Harvard.”

On September 28, Clarke will kick off what he hopes will be an annual event – the East End Poetry Festival at Children’s Peace Theatre, 305 Dawes Rd. The event will feature poets Katie Marshall Flaherty, Ronna Bloom and Rocco de Giacomo, along with a spoken-word workshop led by RISE Poetry’s Randell Adjei, in addition to family activities.

This appointment continues Clarke’s academic career, which has also seen him appointed the inaugural E. J. Pratt Professor of Canadian Literature at the University of Toronto. He has previously taught at Duke University in Durham, North Carolina and McGill University in Montreal.

Clarke, a Toronto-based poet, dramatist, novelist and professor, was appointed by City Council in November 2012 as Toronto’s fourth Poet Laureate. In addition to the many awards and accolades Clarke has received, his dedication to education and his tremendous support of Canadian writers and the literary community has been nationally recognized by his appointment as an Officer of the Order of Canada.

More information about Toronto’s Poet Laureate is available at http://www.toronto.ca/culture/poet_laureate.htm.

More information about the Canada Program is available at http://programs.wcfia.harvard.edu/canada_program.