Furthermore, the consequences of climate change have been reported as follows:

“And in a year when sea ice in the Arctic has shrunk to a record low level, worries of climate change are front and centre.

Aariak said the effects are being felt first-hand in many ways, including hunters falling through sea ice that has become dangerously thin.

Earlier in the week, Bob McLeod, premier of the Northwest Territories, said the effects of global warming are becoming apparent across the N.W.T., too.

“It’s something we notice in our everyday lives,” McLeod said in an interview.

This past winter, it never got below –40C in Yellowknife for the first time since records have been taken. Over the hot summer, the territory has suffered an outbreak of forest fires.

“The unusually hot spells and extreme drought that North America and other parts of the world have experienced over the last few years are inextricably linked to global warming, a prominent NASA scientist claims in new study.”
cnews

“But the U.K.-based Center for Low Carbon Futures, a network of universities, said in a new report that within 10 years large parts of Asia may face long periods of severe drought. Especially hit will be northern China, India, Afghanistan, Mongolia, and Pakistan. Other parts of Asia are likely to face longer and wetter monsoon seasons.

The threat from global climate change comes as rice and wheat yields in Asia are declining, said Paul Teng, a professor and senior fellow at Singapore’s Nanyang Technological University.”
Voice of America 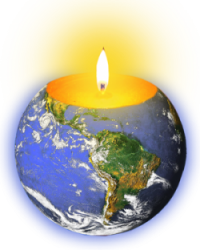 A Fast and Vigil for Climate Justice

Here is an itinerary of events for A Fast and Vigil for Climate Justice: