Toronto 2015 Pan/Parapan American Games will be the largest international multi-sport competition ever hosted in Canada.

More than 10,000 athletes, coaches and delegates from the Caribbean, Central America, South America and North America will compete in 48 sports at more than 40 venues, spread across 17 municipalities of the Greater Golden Horseshoe Region.

The Pan Am and Parapan Am Games feature a wide range of sports as follows:

The final roster of sporting events for the Toronto 2015 Games will be finalized in the near future.

Councillor Mark Grimes (Ward 6, Etobicoke — Lakeshore) leads the City of Toronto’s participation in the Games as Chairman of the Mayor’s Pan Am Games Secretariat, shown in this video: 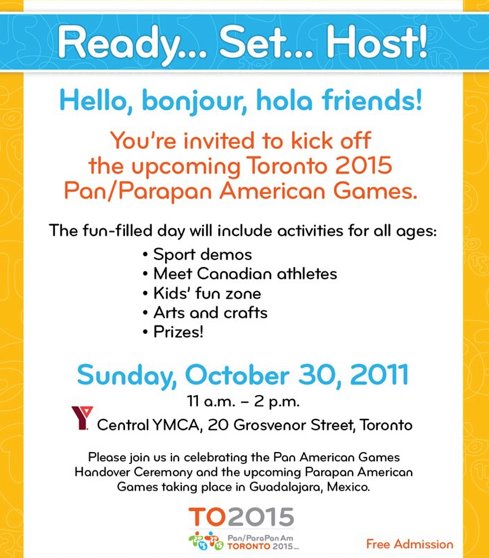 Furthermore, the Guadalajara 2011 Pan/Parapan American Games will feature a two-hour Closing Ceremony with:

Be sure not to miss the eight-minute creative, Canadian storytelling segment “We’ll See You in Toronto in 2015”, which combines athletics and art in a unique mode to represent contemporary Canada, Ontario and Toronto!

This Closing Ceremony for the Pan Am Games will air Sunday, October 30, 2011 beginning at 8:00 pm (Eastern Time) on CBC Television.

A day of fun-filled activities for all ages!

Get your Toronto 2015 celebration on!

Come Celebrate with the TO2015 Organizing Committee at the YMCA.

“As the Guadalajara 2011 Pan Am Games draw to a close, the ceremonial handing over of the Pan American Sports Organization (PASO) flag shifts the Games focus to Toronto in 2015.

And we want you to join us in the excitement.

This kid- and family-friendly event also serves as a showcase for Pan and Parapan Am athletes.

And best of all—it’s free and open to everyone.“

Activities for families and kids of all ages include:

“Everyone loves a party! Hope to see you there.“ 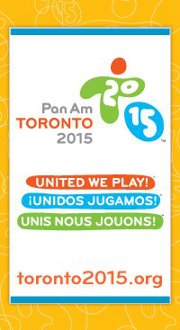