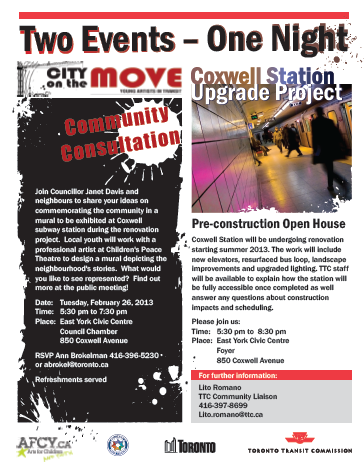 You are invited to the following two events which start at the same time in the same venue, regarding the Coxwell subway station during the renovation project:

City on the Move – Young Artists in Transit

Councillor Janet Davis (Ward 31 Beaches-East York) will be joined by Councillor Mary Fragedakis (Ward 29 Toronto-Danforth) and MPP Michael Prue (Beaches-East York) at a community consultation that will ask the public for input on what they would like to see on a mural that will depict the community surrounding Coxwell subway station.

This community mural will be created by local youth working with a professional artist, and will be exhibited starting in Summer 2013 during the renovation of Coxwell subway station.

City on the Move, Young Artists in Transit is a partnership between the City of Toronto and the TTC with community partners Children’s Peace Theatre and Arts for Children and Youth. The program builds youth skills in visual storytelling, self-expression and community leadership.