This video presents “What kinds of energy are used in Ontario?”

ECO Gord Miller’s recent blog “We could have carbon free electricity in Ontario in 2014! ” empahsized the importance of the changing global climate and Ontario’s role in global reductions of greenhouse gas emissions.

Let Ontario’s Ministry of Energy know what you think their electricity planning priorities should be by participating in their short survey.

However, this survey is not considered a formal submission. If you want to submit your thoughts formally to the LTEP review team, please do so through the Environmental Registry. 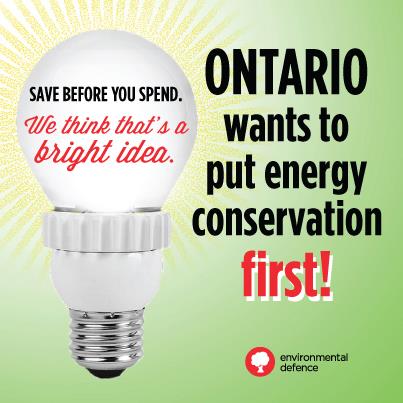 With the current Conservation and Demand Management Framework set to wind down at the end of 2014, it is timely to renew Ontario’s vision for conservation and create a new framework.

The Ministry of Energy is undertaking a formal consultation on innovative conservation ideas and the development of a new conservation framework for Ontario.

Feedback from these discussions will also inform the review of the province’s Long Term Energy Plan.

Ontario is moving toward a new, innovative approach to energy planning by developing a new policy that will ensure the province invests in conservation measures before building new generation, whenever it is cost-effective to do so.

To help design Ontario’s energy path moving forward, the government released Conservation First: A Renewed Vision for Energy Conservation in Ontario. It will help guide discussion as the province seeks input from Aboriginal partners, members of the public, local utilities, municipalities, environmental groups, business associations, and other stakeholders to develop a new Conservation and Demand Management framework. Feedback from these discussions will also inform the review of the province’s Long Term Energy Plan.

The province has made great strides in conservation with programs that help reduce electricity demand and increase efficiency. Investments in conservation programs over the last eight years have allowed Ontario to avoid building new generation that would have cost more than $4 billion.

Conservation programs have also helped Ontarians manage their home energy use and reduce their electricity bills. For example, the saveONenergy programs encourage families and businesses to maximize savings by investing in energy efficient products and upgrades, and the Peaksaver PLUS program offers in-home displays that allow families to monitor their electricity use at home.

Encouraging a culture of conservation is part of the government’s plan to maintain a clean, modern and reliable electricity grid.

“Ontario has saved billions of dollars through conservation, and we have a clear opportunity to do more. By investing in conservation before new generation, where cost-effective, we can save ratepayers money and give consumers new technology to track and control energy use.”
Bob Chiarelli
Minister of Energy