The Alternative Port Lands Vision, presented to City of Toronto Executive Committee on September 6, 2011, is a silent video showing the transformation of the Toronto Port Lands from a historical time to a futuristic time – about  three decades from now:

“Over 800 hectares of strategically located land in the heart of Canada’s economic engine – Toronto’s Central Waterfront – are mostly vacant and underused. About 70 per cent of this land is already in public hands.”

After much ruminations and discussions, the proposed Part II Plan for the Central Waterfront now requires public consultations in order to proceed towards City Council consideration and approval.

Central Waterfront Part II Plan, by Paula M. Dill (Commissioner Urban Development Services) and Paul J. Bedford (Chief Planner and Executive Director City Planning Division), 2001 City of Toronto, is organized around four core principles that will steer the renewal of the Central Waterfront. This will be a multi-decade effort.

“CORE PRINCIPLES
Four core principles will act as a framework for the renewal of the Central Waterfront:

For each principle, the Plan sets out the following “Big Moves” – 23 in all – that will make waves redefining Toronto’s future via central waterfront revitalization: 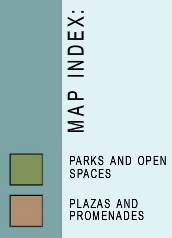 A Flood Protection berm will be built along the Don River to eliminate flooding problems in the West Don Lands and surrounding neighbourhoods to the west.

It will also provide naturalized open space and active parkland along its edge for use by the west Don River communities and fulfill a crucial stormwater function.

The adjacent King-Parliament and St. Lawrence will benefit from this increase in active parkland.

The Renaturalizing the Mouth of the Don River:

The mouth of the Don River will be rerouted through lands south of the rail corridor.

This will improve the ecological function of the river, provide flood protection for the Port Lands and East Bayfront and attract new wildlife to the area.

The renaturalized mouth of the river will also become a key open space and recreational link to the Don Valley, West Don Lands, Port Lands and waterfront park system.

This enhanced river setting will provide a gateway for the new urban communities in the Port Lands.

Bridges that carry the new Queen’s Quay and Cherry street over the river mouth will be designed as signature entrances of beauty and inspiration.

With the construction of the flood protection berm and the naturalization of the mouth of the Don River, the west Don Lands will be redeveloped into diverse mixed-use communities.

D22_The East Bayfront will become a prominent waterfront address for working and living (see the first “Public Realm Map of Port Lands and Don Lands” above).

D23_Building on its historical role as a place for celebration and exhibition, Exhibition Place will be expanded into a dynamic area where people work, play, visit and live.

The benefits to the city and the entire GTA  (Greater Toronto Area) region will be enormous. Over 40,000 housing units and 35,000 jobs can be generated, all in the core of the city.

The focus of this Part II Plan:

The communities that make up the Central Waterfront are shown on Map Two above. Most of the land capable of accommodating new growth in the central waterfront’s west end (i.e. Exhibition Place) is “clean” land with existing infrastructure.

In the east end, particularly in the West Don Lands and Port Lands, where there is greatest opportunity for change, much of the land needs soil and groundwater remediation and new infrastructure.

City Council retains authority for the approval of all planning policies, including the Part II Plan, area-specific precinct strategies and the Development Permit By-laws.

The Toronto Waterfront Revitalization Corporation will be responsible for developing a business plan based on the principles, objectives and ideas expressed in this Part II Plan.

Waterfront renewal will be managed as an ongoing phased effort that will carry on for decades, subject to budgeting and program availability.

NEXT STEPS
Now that the City has released the Central Waterfront Part II Plan, they are eager to hear what the public thinks before it is considered for approval by City Council. The plan will be discussed at a series of local and city-wide public meetings as follows:

THE CITY OF TORONTO, PROVINCE OF ONTARIO AND GOVERNMENT OF CANADA ARE COMMITTED TO MAKING THE REVITALIZATION OF TORONTO’S CENTRAL WATERFRONT A REALITY.”

“TELL US WHAT YOU THINK
To obtain a copy of the Plan, ask questions or give us your comments, please contact us in any of the following ways:
e-mail: www.city.toronto.on.ca/waterfront Write: Waterfront Section
Phone: (416) 338-0338 Community Planning – South District
Fax: (416) 392-1330 18th Floor, East Tower, City Hall
100 Queen Street West
Toronto, Ontario M5H 2N2″

Toronto, November 25, 2011 – Waterfront Toronto and the City of Toronto have begun work to create a development and implementation plan for the Port Lands and are inviting members of the public to be part of the process.

The goal of the initiative is to deliver a high-level road map for accelerating development and maximizing the value of the Port Lands as a unique city legacy. The undertaking is the result of Toronto City Council’s September 21 unanimous decision for Waterfront Toronto in conjunction with the City of Toronto to lead a review of the Port Lands and to ensure the process is informed by extensive public consultation.

An initial public meeting is being held from 6:30 p.m. to 9:00 p.m. on Monday December 12 at the Toronto Reference Library, 789 Yonge Street. The meeting will include a summary of the work to date, the goals for the Port Lands initiative and an overview of acceleration opportunities and challenges for development.  The meeting will provide the public with an opportunity to ask questions and discuss their goals and ideas for the Port Lands.

“The work being undertaken is an opportunity to seize the full potential of these lands and to deliver development of enduring value and legacy to the people of Toronto,” said Councillor Peter Milczyn, chair of the City’s Planning and Growth Committee. “It is a first step in realizing our joint objective of creating one of the world’s great waterfronts.”

The work is a highly collaborative process. Waterfront Toronto and the City are working closely with Toronto and Region Conservation and seeking input from other agencies such as The Toronto Port Lands Company and the Toronto Port Authority.  Stakeholders such as land owners, tenants, port users and sector specific groups are being engaged throughout the process.

Work on the Port Lands acceleration initiative is well underway. A series of technical working groups are examining key issues including land use and design, infrastructure and constructability, and real estate development and financing.  Waterfront Toronto has also issued or will be issuing a number of Requests for Proposals to competitively procure the required technical expertise.

“Our intent is to take a fresh and wide-ranging look at the challenges and opportunities of developing the Port Lands, including examining phasing options, higher-value interim uses, and the feasibility of modifying or removing existing constraints,” said Waterfront Toronto President and CEO John Campbell.

The comprehensive undertaking builds on the large body of work delivered to date on the Port Lands and Lower Don Lands and explores new ideas and creative solutions. The project includes:

Public consultation will play a central role in the creation of the go forward plan for the Port Lands and will include traditional in-person public meetings and interactive social media and/or web enabled consultations. The on-line consultation initiative is expected to launch early in 2012. In addition to the December 12 meeting, two rounds of public consultation are planned to be held throughout the city in 2012.

The final report on the results of the Port Lands review is expected to be completed for the June 2012 City Council meeting. On January 24, 2012 the City and Waterfront Toronto will provide City Council’s Executive Committee with a report on required funding for the review.

The Governments of Canada and Ontario and the City of Toronto created Waterfront Toronto to oversee and lead the renewal of Toronto’s waterfront. Public accessibility, design excellence, sustainable development, economic development and fiscal sustainability are the key drivers of waterfront revitalization.

Toronto is Canada’s largest city and sixth largest government, and home to a diverse population of about 2.7 million people. Toronto’s government is dedicated to delivering customer service excellence, creating a transparent and accountable government, reducing the size and cost of government and building a transportation city. For information on non-emergency City services and programs, Toronto residents, businesses and visitors can dial 311, 24 hours a day, 7 days a week.
——————————————
You may also like: