Also, the Government of Canada, Province of Ontario and City of Toronto are bringing improved transit to North York and Scarborough.

The Sheppard Avenue East Light Rail Transit (LRT) project in Toronto will have the following features:

This project will transform Sheppard Avenue East and provide transit users with many improvements and benefits including:

“Without the ability to move lots of people efficiently and affordably, great cities can’t be great.” This video shows Metrolinx’s plan, The Big Move:

Here is the timeline of the above partners’ actions culminating in the eventual Expert Advisory Panel’s recommendation that Sheppard Avenue East transit to be transformed to the above-ground Light Rail Transit (LRT) rather than the underground subway: 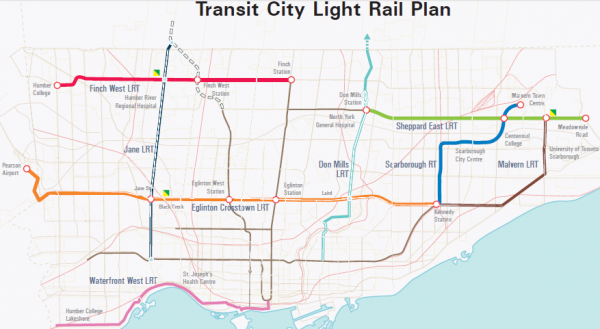 Presently, the recommendations from the panel of transit experts (Expert Advisory Panel) regarding transit on Sheppard Avenue East are summarized as follows:

The panel recommended that Council approves light rail transit along the surface of Sheppard East between Don Mills Road and Morningside Avenue for the following real reasons:

The ‘Report of the Expert Advisory Panel Regarding Transit on Sheppard Avenue East’ (March 15, 2012) concludes by:

City Council will consider the report and its recommendations during a special meeting Wednesday, March 21.

What do you think?

Do you support or reject the Expert Advisory Panel’s recommendations?

Please click here to read the full ‘Report of the Expert Advisory Panel Regarding Transit on Sheppard Avenue East’ , which contains the recommendations (pdf).

The Expert Advisory Panel today released its recommendations for the future of rapid transit on Sheppard Avenue East. The report will be presented to City Council for consideration at a special Council meeting on March 21.

The mandate of the Panel was to advise City Council on the most effective means of delivering rapid transit to the greatest number of riders along  Sheppard Avenue East and to review existing and potential funding opportunities for transit along this corridor.

“The Panel established specific criteria to evaluate each option that was before us,” said Professor Eric Miller, Director of the University of Toronto’s Cities Centre and respected leader in urban transportation, on behalf of the Panel. “After a detailed assessment, the Panel concluded that Light Rail Transit (LRT) is the recommended mode of transit for Sheppard Avenue East.”

There was strong consensus across the Panel that LRT  was the best option available based on criteria that provided the greatest economic impact, best use of funding, transit service, sustainability and social impact.

The Expert Advisory Panel regarding transit on Sheppard East was established by City Council at a special Council meeting on February 8.  The Panel members are:

More information about the report is available at http://app.toronto.ca/tmmis/index.do

Professor Miller is the Chair of the U.S. Transportation Research Board (TRB) Committee on Travel Behavior and Values and past-Chair of the International Association for Travel Behaviour Research.  He has served as Acting Chair of the Department of Civil Engineering during 1998-99, 2003 and 2007.  He was also the past-Chair of the TRB Sub-Committee on Integrated Transportation – Land Use Modeling and Member Emeritus of the TRB Transportation Demand Forecasting Committee and served on the TRB Task Force on Moving Activity-Based Approaches to Practice and the US National Academy of Sciences Committee for Determination of the State of the Practice in Metropolitan Area Travel Forecasting.

Professor Miller’s  research interests include: integrated land use transportation modelling; analysis of the relationship between urban form and travel behaviour; modelling transportation system energy use and emissions; and microsimulation modelling. He is the developer of GTAModel, a “best practice” regional travel demand modeling system used by the City of Toronto, the Region of Durham, the Cities of Mississauga and Brampton to forecast travel demand in the Greater Toronto Area; TASHA, a state-of-the-art activity-based microsimulation model of GTA travel; and ILUTE, an integrated land use – travel demand models system for the GTA.

Professor Miller’s international experience includes transit planning in Cairo, Egypt and developing a travel demand model in Mumbai and Hyderabad, India.  He is co-author of the textbook Urban Transportation Planning: A Decision-Oriented Approach, the second edition of which was published in 2001.