This video shows that:

The City of Toronto in Ontario, Canada, is developing a 1,000 km Bikeway Network that will: 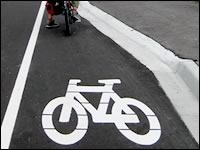 Did you know about the 2012 Inventory of Toronto’s Paved Major Multi-Use Trails?

This is an update to my previous blog Calling Cyclists: Public Meeting on Proposed New Trail Connections in Toronto Feb. 6, 2012.

City of Toronto informs us about the following outcomes of Trails Planning Public Open House:

As listed below, there are three fabulous Bike Month 2012 events in Toronto.

The NFB Mediatheque invites you, your family and friends to the following frugally fun event:

“Biking is a great way to get exercise, to be kind to the environment & to spend quality family time. Unfortunately, it’s one sport with many dangers.

Kids will get to use their imaginations to think through some of the rules of bike safety while illustrating their stories.

Wear a helmet, save your melons.”

“Around the world in many cities, there are Bike to Work days, Weeks and Months.

These celebrations are to raise awareness of the benefits of cycling, and to try to encourage people to ride their bikes more.

Bike Month 2012 will be presented by the City of Toronto and the Toronto Cyclists Union: