Brazil’s Awá rely on their forest home for survival but intensive logging poses a serious threat to their future as shown here:

Survival International brings to our attention the ‘Genocide’ risk in Brazil despite UN push to end racism.

Experts, including Brazil’s National Indian Foundation (FUNAI), anthropologist Awá expert, Dr Eliane Cantarino O’Dwyer, and a Brazilian Judge, concluded that ‘the Awá are facing a real situation of genocide’ inside Brazil’s Amazon, due to:

The Awa’s forest is facing one of the highest rates of deforestation of all indigenous areas in the Amazon.

Satellite images show over 30% of the rainforest in one of four territories inhabited by the Awá has already been destroyed.

‘The Awá are the world’s most threatened tribe. If their rights are not protected, they’ll only exist in the pages of history books. The UN’s call to wipe out racial discrimination is one step towards changing attitudes, and helping to keep the Awá’s forest home intact.’ 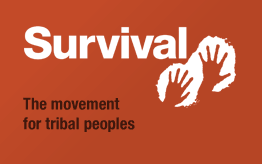 Your support is vital if the Awá are to survive. There are many ways you can help.