Bayer has launched flupyradifurone (trade mark as Sivanto Prime) in Honduras and Guatemala this year. The US EPA has scheduled registration decision for this by the end of this year. The comment for PMRA’s proposal is open to public until November 3rd.

“Health Canada’s Pest Management Regulatory Agency (PMRA), under the authority of the Pest Control Products Act and Regulations, is proposing full registration for the sale and use of Flupyradifurone TC, and the end-use products BYI 02960 480 FS and Sivanto 200 SL, containing the technical grade active ingredient flupyradifurone, to control various insect pests…..

Flupyradifurone is moderately persistent to persistent in the terrestrial environment and persistent in the aquatic environment with the exception of the photic zones where it is not expected to persist. Flupyradifurone is highly mobile and has a potential to leach to groundwater and enter aquatic environments through surface runoff. Flupyradifurone used as a foliar spray may pose a potential risk to non-target terrestrial and aquatic invertebrates, including bees. When flupyradifurone is used for soybean seed treatment, it poses a potential risk to birds and small wild mammals. However, no risk to bees is expected through dust-off exposure during planting of treated seeds. The identified risks can be mitigated with spray buffer zones to protect sensitive aquatic habitats from spray drift and through the use of label statements to inform and instruct users regarding potential risks to birds and mammals, bees and beneficial arthropods, and to the environment….

Before making a final registration decision on flupyradifurone, the PMRA will consider all comments received from the public in response to this consultation document. The PMRA will accept written comments on this proposal up to 45 days from the date of publication of this document. Please note that, to comply with Canada’s international trade obligations, consultation on the proposed MRLs will also be conducted internationally via a notification to the World Trade Organization. Please forward all comments to Publications (contact information on the cover page of this document). The PMRA will then publish a Registration Decision, which will include its decision, the reasons for it, a summary of comments received on the proposed final decision and the Agency’s response to these comments.

In the letter below, the SumofUs.org team urges us to:

We have less than one week. 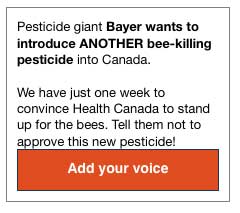 week to convince Health Canada to stand up for the bees.

If approved, this new pesticide will likely wreak further havoc on our bees, which are already dying in record numbers. Last winter, almost 30 percent of Canada’s bee colonies were devastated, and strikingly, we lost over half of our bee colonies in Ontario alone. Judging by Bayer’s deadly track record, this new pesticide could speed up the complete decimation of the local bee population, which would have catastrophic effects on Canada’s food supplies.

The final decision lies in Health Canada’s hands, and we have until November 1 to make our voice heard. If we want Health Canada to stand up to Bayer, it needs to hear from us now.

Bees are diligent, unassuming creatures. They pollinate our crops, and are responsible for one out of every three bites of food we eat. It’s simple — no bees means no food for us.

This new pesticide, flupyradifurone, is very similar to an existing class of pesticides called “neonics”. Neonics are systemic pesticides — they don’t just remain on the surface, but are absorbed into plant tissues, and this new pesticide works the same way. Research shows that neonics severely impair bees’ immune systems, making them vulnerable to deadly viruses. These pesticides have already been deemed so harmful that they are banned in Europe.

But pesticide companies like Bayer are merciless. They’re already suing the European Union to overturn the ban (and SumOfUs is heading to court to fight back)! Elsewhere in the world, pesticide companies are busy lobbying and bullying politicians against a ban, like in the United States.

It won’t be easy for Health Canada’s Pest Management Regulatory Agency (PMRA) to stand up to a pesticide company that is spending millions to get its way. Bayer has money, but we have the power of people. The only way we can get the PMRA to make the right decision is to make sure that it sees that there is widespread public opposition to Bayer’s proposal. The comment period closes on November 1, so we have to act quickly.

Thanks for all you do,
Angus, Katherine, and the team at SumOfUs