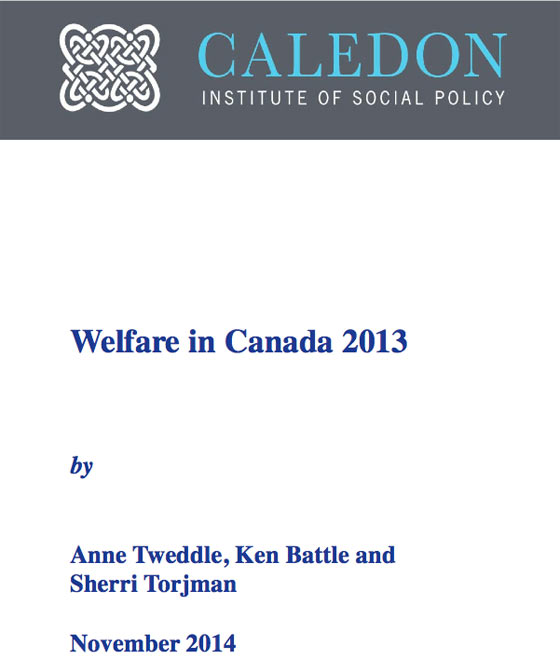 Today, the Welfare in Canada 2013 (pdf) report by Anne Tweddle, Ken Battle and Sherri Torjman, is released from the Caledon Institute of Social Policy in Ottawa.

“It is important to note that the amounts shown for welfare represent the maximum paid for basic needs.

This report focuses on the incomes of four different households living on social assistance, commonly known as “welfare.” It is a continuation of the welfare incomes series published regularly by the former National Council of Welfare.

Social assistance is the program of last resort. It is intended for persons who have exhausted all other means of financial support. Every province and territory has its own social assistance program, so no two are exactly the same.

Each program has different administrative rules, eligibility criteria, benefit levels and provisions regarding special assistance. However, the basic structure of social assistance is much the same across the country, even though the specifics may vary.

The most common way of assessing the adequacy of any income program is to compare it to a recognized standard and then determine how far it diverts from that indicator. There is no single or commonly accepted baseline, but rather several measures that typically are used for comparative purposes. They fall into one of two groups: poverty measures and income measures.

In 2013, welfare incomes for single employable households ranged from 36.1 percent of the after-tax poverty line in Manitoba to a ‘high’ of 65.0 percent in Newfoundland and Labrador . Most of the other jurisdictions cluster around the lower rate.

In Saskatchewan , we include for the first time incomes of persons with disabilities on the Saskatchewan Assured Income for Disability (SAID) program. This program also pays higher rates than standard welfare. For 2013, the income of single persons on SAID was 83.6 percent of the after-tax LICO, compared to 68 percent for those receiving Saskatchewan Assistance Plan benefits.

For single-parent households with one child age 2, welfare incomes represented 62.8 percent of the poverty line in Manitoba and a surprising 103.1 percent of the after-tax LICO in Newfoundland and Labrador . For two-parent families with two children, welfare incomes as a percentage of the poverty line ranged from 58.8 percent in Manitoba and 59.0 percent in BC to 85.5 percent in Prince Edward Island .

The report also compares total welfare incomes in 2013 with the Market Basket Measure. As in the case of after-tax poverty lines, welfare incomes fall well below the designated baseline for all household types and in all jurisdictions, with the exception of persons on Alberta ’s AISH program and the Saskatchewan ’s SAID program.

Income measures comprise the second group of comparators. This set of measures assesses the adequacy of welfare relative to the level of income of other households in the population. There are several different indicators that can be used for comparative purposes. Two have been selected for this analysis: after-tax average incomes and median incomes.

After-tax average incomes represent the amounts that households actually can use in their daily lives – their so-called ‘disposable income’ after they have paid federal and provincial/territorial income taxes. After-tax amounts represent a good basis for comparison to welfare, which is not subject to income taxation and is therefore effectively a de facto disposable income.

While the conclusions are basically the same when the former are compared to after-tax median incomes – differences are typically only a few percentage points – the adequacy picture comes out only slightly better because of the different comparator base.