Festival Preview with performances in Yonge-Dundas Square, Trinity Square Park and on Gould at Victoria St. on Aug 22, from Noon to 6pm.

Throughout the Downtown Yonge Neighbourhood from Queen Street to College Street. (Full road closures in effect from Thursday at 6pm onwards.) 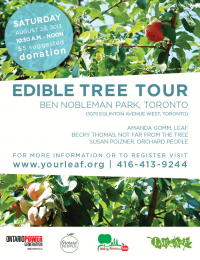 Along Spadina Avenue and Huron St.

A more complete list of events and road work is available at http://www.toronto.ca/torontostreets/.

Today, Toronto announces the full program of the eighth edition of Scotiabank Nuit Blanche in the News Release below.

The City of Toronto today released the entire artistic program for the eighth edition of Scotiabank Nuit Blanche, which will take place Saturday, October 5 from 6:51 p.m. until sunrise. This year’s lineup includes 112 art projects created by more than 500 local, national and international artists who will transform the streets of Toronto for a single night.

“With over a million people attending Scotiabank Nuit Blanche, and 20 per cent of them tourists, it’s a great event both culturally and economically for Toronto,” said Mayor Rob Ford. “An event of this scale puts Toronto on the map globally as a cultural tourism destination and strongly positions us as a creative hub internationally.”

“Scotiabank Nuit Blanche is a collaboration of the City of Toronto, the art communities, corporate sponsors and hundreds of volunteers who believe in the success of the event year after year,” said Councillor Gary Crawford (Ward 36 Scarborough Southwest). “By making contemporary art available to a mass audience, the city comes alive and we all benefit.”

“We believe embracing the arts pushes us to develop new perspectives and inspires us to pursue our passions. That’s why we’re proud that Scotiabank Nuit Blanche gives people the chance to discover art in their community,” said Jacqueline Ryan, Scotiabank’s Vice President of Sponsorship and Partnership Programs. “We’re also thrilled to present 1nspired Night, a new installation that allows the public to connect more deeply with Scotiabank Nuit Blanche this year.”

Again this year, the City is producing an exciting lineup of contemporary art projects.

1. Off to a flying start
An exhibition curated by Ami Barak, an independent curator and lecturer at the Paris Sorbonne University, “Off to a flying start” celebrates the centenary of artist Marcel Duchamp’s first ready-made art installation. This exhibition at Toronto City Hall/Nathan Phillips Square brings the ready-made art found in galleries and museums back to the streets.

Highlights:
– Nathan Phillips Square will feature artist Ai Weiwei’s “Forever Bicycles” sculpture. This complex and abstract installation, consisting of 3,144 bicycles, is the largest edition of this work to date. This installation is the only version of the art work to be displayed in an open air, public space
– Melik Ohanian’s “El Agua de Niebla” installation increases the scale of the traditional hammock exponentially, creating a strange collective territory suspended above city streets
– Alain DeClercq’s “Crash Cars” performance piece takes two cars, representative of wealth and power, and sets them on a 12-hour trajectory without drivers.
– Faith LaRocque’s “Air of Paris” is a scent installation that invites visitors to take an olfactory journey to Paris in 1919.
– The basement of City Hall is home to a live freeform performance by shopping bags in the installation “Hysteria Coordinating” by Sherry Hay.
– “VSVSVS” will answer the audience’s question: Is this art? People will be invited to call “1-855-IS IT ART” for insights, answers and possibly more questions.

2. PARADE
Patrick Macaulay, head of Visual Arts at Harbourfront Centre, curates an exhibition called PARADE. The format is archetypal, the route is set, the floats are complete, but unlike a conventional parade, the audience becomes the procession. PARADE will be situated along University Avenue from Queen Street West extending north to Charles Street West.

Highlights:
– John Dickson’s kinetic sound sculpture “Music Box” is an absurd mechanical contraption that creates frenetic musical noise in joyful response to the carnival-like atmosphere of the event.
– Idea Tank Design Collective’s light installation “Parallax” uses light to articulate movement creating an optical illusion for the audience to experience.
– “Rumbling Drumlins” by AGATHOM Co. is an installation that poses questions about the haphazard nature of the built environment.
– “A Quack Cure” by Lisa Hirmer as DodoLab is a performance piece bringing to life a troupe of otherwise-extinct creatures for a night of revelry.
– In Margaux Williamson’s “How to See in the Dark,” experience why the darkness is so important and why it needs to be saved.

3. Romancing the Anthropocene
Curated by Ivan Jurakic, Director/Curator at the University of Waterloo Art Gallery, Waterloo, and Crystal Mowry, Curator of Collections and Exhibitions, Kitchener-Waterloo Art Gallery, present Romancing the Anthropocene. This exhibition, on King Street from Yonge Street to John Street, acknowledges the triumph of science and human achievement but also suggests a cautionary message about the destruction of natural habitat.

Highlights
– “The Anthropocene” by Caledonia Dance Curry, also known as Swoon, is street art in the form of life-sized, cut-paper portraits inspired by both the physical space and the surrounding community.
– Charles Stankievech’s “The Soniferous Æther of the Land Beyond the Land Beyond” is a 35-mm film that was shot in the northernmost settlement on earth. It looks at remote outpost architecture, military infrastructure and the embedded landscape.
– Brendan Fernandes’ “Night Shift” is a durational performance inspired by Le Ballet de la Nuit, a 12-hour court ballet where Louis XIV performed the title role of the Sun King. The work has been re-contextualized into a contemporary dance performance.
– Kelly Richardson’s “Mariner 9” presents a life-size, panoramic view of a Martian landscape set hundreds of years in the future, littered with the rusting remains from various missions to the planet.
– “Tanks” by Cal Lane juxtaposes industrial materials with domestic elements in sculpture by combining opposing extremes of lace and steel recycled into heraldic emblems of a lost industrial age.

Extended projects in 2013
This year, a number of artist projects will be extended for one week. If you want to see some of this year’s projects in a different light, visit them until October 14. Artists whose work will be extended include Ai Weiwei, Boris Achour, Cal Lane, Janet Biggs, Pascale Marthine Tayou and Tadashi Kawamata. A complete list of times and locations is available on the website.

Nuit Talks
A series of free themed talks are scheduled to run October 3, 4 and 5. The talks allow for frank discussion, and a behind-the-scenes look at the artists and their work.
Nuit Talks themes include: a celebration of the ready-made, the use of science, technology, the role of history and past experience in contemporary art. The event curators will share the artistic narratives of their exhibitions and this year a special presentation will take place in partnership with the AGO’s First Thursdays. A full list of events, speakers, locations, ticket information and times will be available at www.scotiabanknuitblanche.ca/2013-event/nuit-talks.html.

1nspired Night: a new project activation by Scotiabank
1nspired Night is an art installation that captures the videos and photos of festival goers at Scotiabank Nuit Blanche and projects these images onto a 50 foot canopy of screens. It is an immersive, mesmerizing experience that allows the public to walk through a moment in time seeing images shared from installations and exhibits throughout the city.

Community-produced Independent Projects
The community-produced portion of Scotiabank Nuit Blanche 2013 will feature 67 projects created by cultural and educational institutions, neighbourhoods and individual artists. The projects expand the boundaries of the event and showcase the diversity of Toronto’s art community.

The BATA Shoe Museum, the Gardiner Museum and the AGO along with 401 Richmond , the Gladstone Hotel, TIFF Bell Lightbox, Artscape at Daniels Spectrum in Regent Park and Wychwood Barns and many more organizations are hosting important projects in their unique venues. Entire neighbourhoods including St Clair West, Queen West and the Distillery District will feature multiple installations by local artists.

Book a two-night stay with any Scotiabank Nuit Blanche hotel partner and receive an exclusive invitation to be among the first to experience “Off to a flying start” at a special preview event called Behind the Nuit on Friday, October 4. This offer includes an opportunity to meet with the curators and preview Ai Weiwei’s “Forever Bicycles” before anyone else. Additionally, receive a special offer from the Art Gallery of Ontario for those attending Ai Weiwei: According to What? Exhibition details are available at http://www.ago.net/aiweiwei.

Whether the audience is planning a weekend getaway or looking for a spot to recharge after a long night, 15 hotel partners offer rates and packages for any budget.

Complete information on all travel packages can be found at http://www.scotiabanknuitblanche.ca/travel-packages.

Scotiabank Nuit Blanche is Toronto’s annual all-night celebration of contemporary art, produced by the City of Toronto in collaboration with Toronto’s arts community. Since 2006, the event has featured more than 850 official art installations, created by nearly 3,500 artists and has generated more than $138 million in economic impact for Toronto.

About Scotiabank
Scotiabank is committed to supporting the communities in which we live and work, both in Canada and abroad, through our global philanthropic program, Scotiabank Bright Future. Recognized as a leader internationally and among Canadian corporations for our charitable donations and philanthropic activities, Scotiabank has provided on average approximately $47 million annually to community causes around the world over each of the last five years. Visit us at http://www.scotiabank.com.