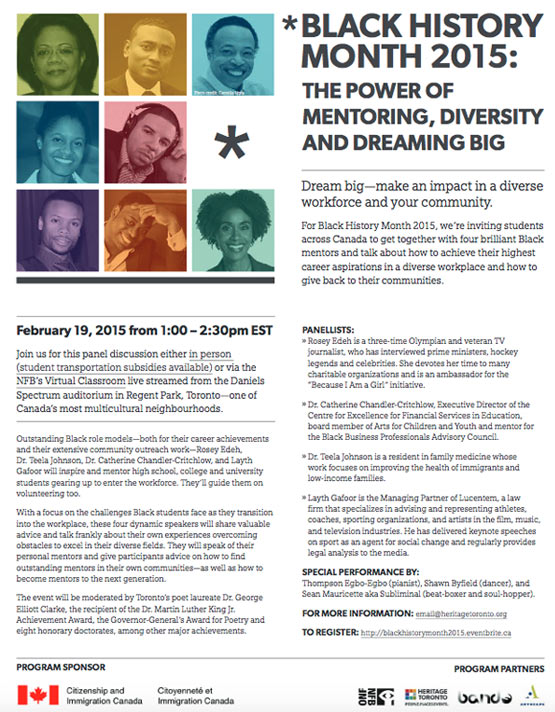 Celebratory events for Black History Month in February include the following. (Most events have FREE admissions.)

City of Toronto to proclaim February as Black History Month

“Black History Month gives us an opportunity explore and celebrate the rich African-Canadian history that has helped build our city,” said Mayor John Tory. “Canadians of all backgrounds should know the incredible history of our black citizens as builders, advocates and people who defended our country in many challenging times and who lead in so many ways today. That is why Black History Month is so important. It gives us an opportunity to explore and celebrate the contribution of our black community.

City divisions and agencies will have programming throughout the month, in addition to the many private events that will take place across Toronto. The Toronto Public Library will recognize Black History Month with song, film and literature that celebrate African-Canadian culture. On Friday, February 20, from 2 to 4 p.m., the Toronto Reference Library, 789 Yonge St., will host Toronto’s Poet Laureate, George Elliott Clarke, along with Toronto poets Lillian Allen, Clifton Joseph and Andrea Thompson in a discussion called Malcolm X: 50 Years After – Pertinent or Passé? The Toronto Public
Library also holds more than 16,000 items in the Rita Cox Black and Caribbean Heritage Collection.

On Thursday, February 12, from 2 to 4 p.m., Toronto Public Health will present Racism, Health & Resilience: Strategies for Closing Health Inequities, a discussion with Dr. Kwame McKenzie about the affects of racism on people’s health. The event will be held at the Ryerson Student Centre, 55 Gould St.

During the month of February, Mackenzie House will profile African-Canadians from the Victorian era in A Glimpse of Black Life in Victorian Toronto 1850-1860. On February 19, Heritage Toronto is hosting The Power of Mentoring, Diversity and Dreaming Big at the Daniels Spectrum, 585 Dundas St. E. A listing of City-related exhibitions, educational displays and community-based events can be found at bit.ly/1CK2bcz.

Toronto is Canada’s largest city, the fourth largest in North America, and home to a diverse population of about 2.8 million people. It is a global centre for business, finance, arts and culture and is consistently ranked one of the world’s most livable cities. Toronto is proud to be the Host City for the 2015 Pan American and Parapan American Games. For information on non-emergency City services and programs, Toronto residents, businesses and visitors can visit toronto.ca, call 311, 24 hours a day, 7 days a week, or follow us @TorontoComms.