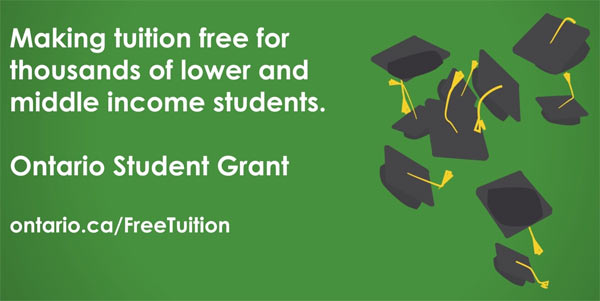 The Ontario Student Grant will provide additional support for full-time mature and married students, and eligibility will no longer be tied to the number of years a student has been out of high school. This predictable, upfront grant will allow families to plan for their education on the basis of net price — the difference between the sticker price of tuition and what a student actually needs to pay. The government will work closely with the postsecondary sector to develop planning tools that more accurately calculate the net tuition and net price of a university or college education.

Ontario’s highly skilled workforce is one of its greatest competitive advantages. In 2014, 66 per cent of Ontario adults had a postsecondary credential, up from 56 per cent in 2002 and higher than the rates for any country in the Organisation for Economic Co-operation and Development, positioning Ontario to meet or exceed its target of 70 per cent by 2020.

Breaking down barriers to postsecondary education is part of the government’s economic plan to build Ontario up and deliver on its number-one priority to grow the economy and create jobs. The four-part plan includes investing in talent and skills, including helping more people get and create the jobs of the future by expanding access to high-quality college and university education. The plan is making the largest investment in public infrastructure in Ontario’s history and investing in a low-carbon economy driven by innovative, high-growth, export-oriented businesses. The plan is also helping working Ontarians achieve a more secure retirement.

“Providing affordable and accessible postsecondary education for everyone in the province, regardless of their background or circumstance, is an investment in Ontario’s future. By supporting students from low- and middle-income families as they pursue a university degree or college diploma, our government is helping to build the highly skilled workforce that will generate economic growth, improve social mobility and create long-term, sustainable prosperity for our province.”
Kathleen Wynne
Premier of Ontario

“This is a tremendous day for students and their families across the province. By making average tuition free for tens of thousands of students and increasing eligibility for support to so many more, we are demonstrating how firmly we believe in the importance of investing in Ontario’s people. All students should be able to afford to go to college or university in Ontario. This transformative grant will be more generous and more straightforward, breaking down barriers that might be preventing Ontarians from getting a postsecondary education while continuing to help students who are currently benefiting from important grant support.”
Reza Moridi
Minister of Training, Colleges and Universities